Dead People, But, Like, Not In The Literal Sense

Time for our second weekly post about characters! Yaaaaaay.

I figured splitting these per year would be ideal, so today we're focusing on the second years. The "Dead"!

No, not literally. Not yet, at least. As explained a few times through the game and in the in-game glossary (made specifically for people like me, who can't remember anything for the life of them), as soon as you, a first-year, take part in the "ritual" held by the hierarchies, you become a Living. Flash-forward to your second year, you become a Dead. And then, in your third year? Death God. You might even be one of the big shots, if you're popular enough!

But let's stick to the second-years. 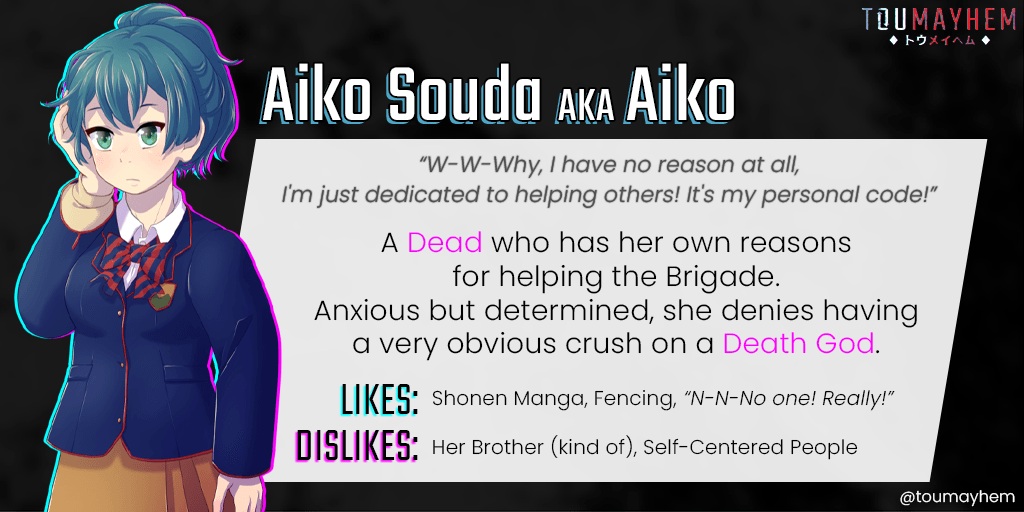 At this point, you might know Toumayhem has been a thing for many, many years. I used to hide Aiko's crush, thinking it was a spoiler, or it could at least be an "oh!" moment. But it's so painfully obvious to most characters with a functioning brain (yeah Akito didn't get it) I have decided to just mock her publicly. She's my favourite, by the way.

A fun fact: she's the one with the highest average number of words per textbox ratio! She tends to go on a tangent when she panics. She panics a lot. Her earnest selflessness and her drive to constantly push through her anxieties (and being a useless lesbian) make her, for me, one of the most fun characters to write, maybe second to her brother. Speaking of her brother... 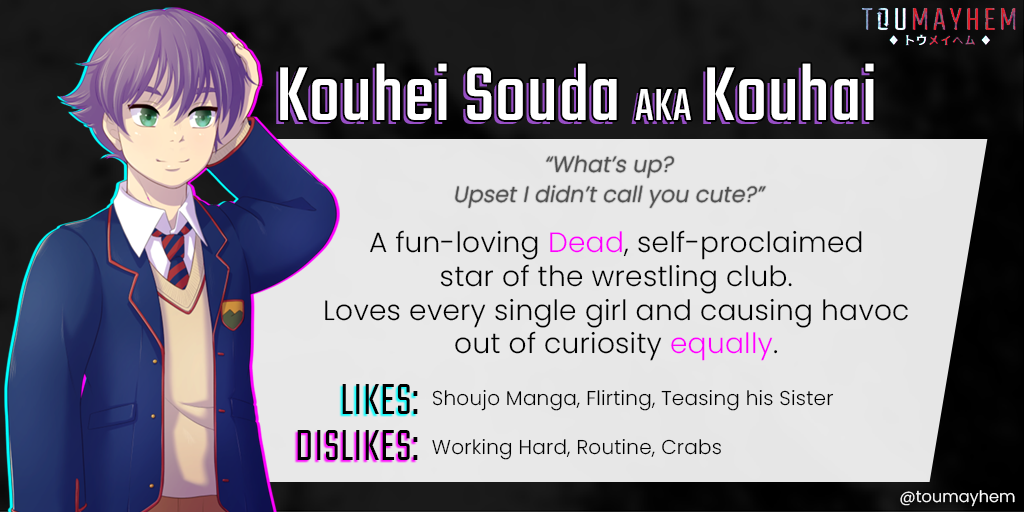 GOAT. When considering which character could work as transgender (something I briefly touched on last week) I have to admit my FIRST choice was this dude because "he's the best". That's it, that's the reason. I was a bit unsure at first, as his sister has ZERO of his confidence, and I thought to myself "isn't it a bit weird that her brother is living the life while she makes such a big deal of being a lesbian?" but Aiko's main problem is her lack of confidence PERIOD, she didn't even entertain the thought that liking a girl might be a problem. Their family has always been very supportive by the way, she's the only one like this.

But let's talk about him! He's just SO FUN to write. The kind of chaotic neutral character you love to pull off when you need to spice up things a little. When I'm in trouble, I always ask myself what Kouhei would do: then consider that might get me arrested.