Hey there, it's been a while.

Guess when I was supposed to write this?

Well, huh, would you look at that

I'm not very good at communicating and working at once, which is GREAT news considering I've been pretty lousy at the former. Everything is going great, actually! Script is done, most sprites and backgrounds are done, putting both together is done and just half of the music and lots of testing need to be worked on. Pretty sweet, if you ask me.

That's why I'll finally get to fulfil that promise I made in that one tweet one time.

Little did I know about what awaited me, still...

This couldn't possibly THAT hard

Guess what! It was.

Ever since I started working on Toumayhem I wanted to have a navigable flowchart, à la Zero Escape

"Someone probably already did that!", despite how common it's found in visual novels with lots of branches, was wishful thinking. If anyone did before me, they kept their code very close to their heart (understandably). Despite how much I want to pry my curious little eyes into the endeavours of a more brilliant mind, I had to give up on that. It was either learning Pygame (which I'm sure would've borne ripe fruits, but it takes time and effort I already spend on programming 8 hours a day in my day job) or find another solution.

And I'm the queen of finding another solution.

Let's start from the beginning

Being the Uchikoshi enthusiast I am, I turned to another game to take inspiration from: Remember 11. 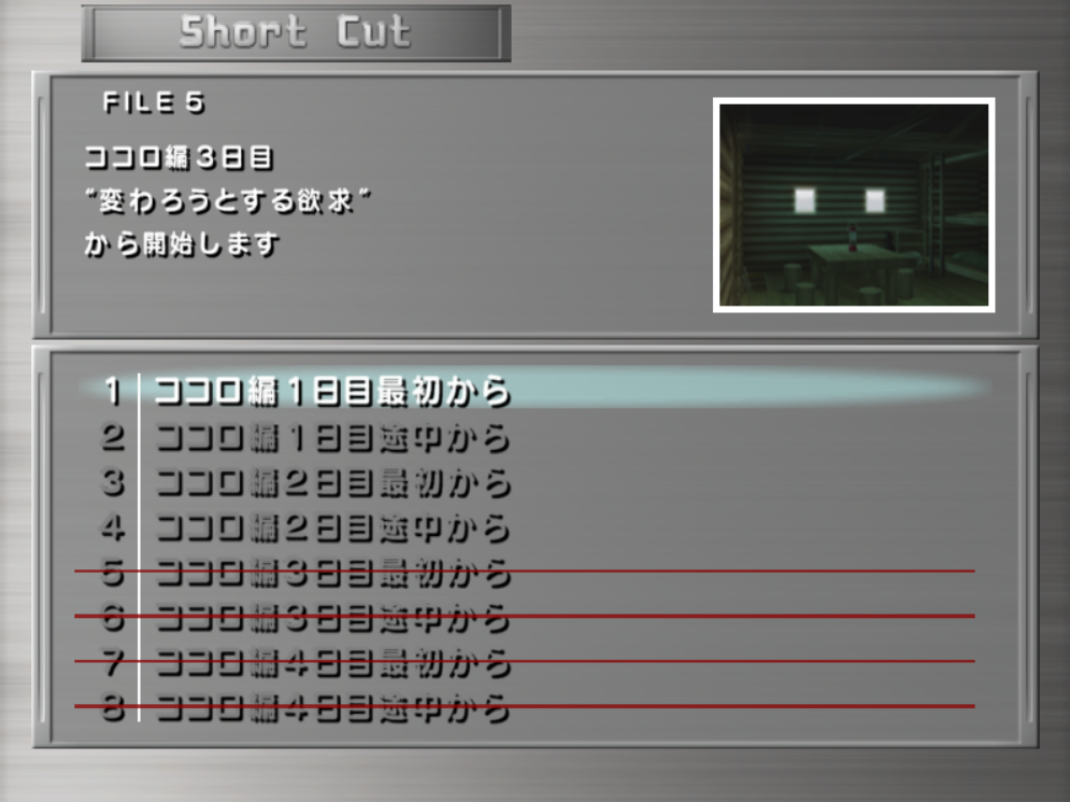 Pretty straightforward: just a list of scene names, those you still haven't seen are hidden. Click on one you've unlocked, and voilà! You can start directly from there.

But I wasn't satisfied by this boring implementation. I like to know where I am in the story! So I tried merging the two concepts together... 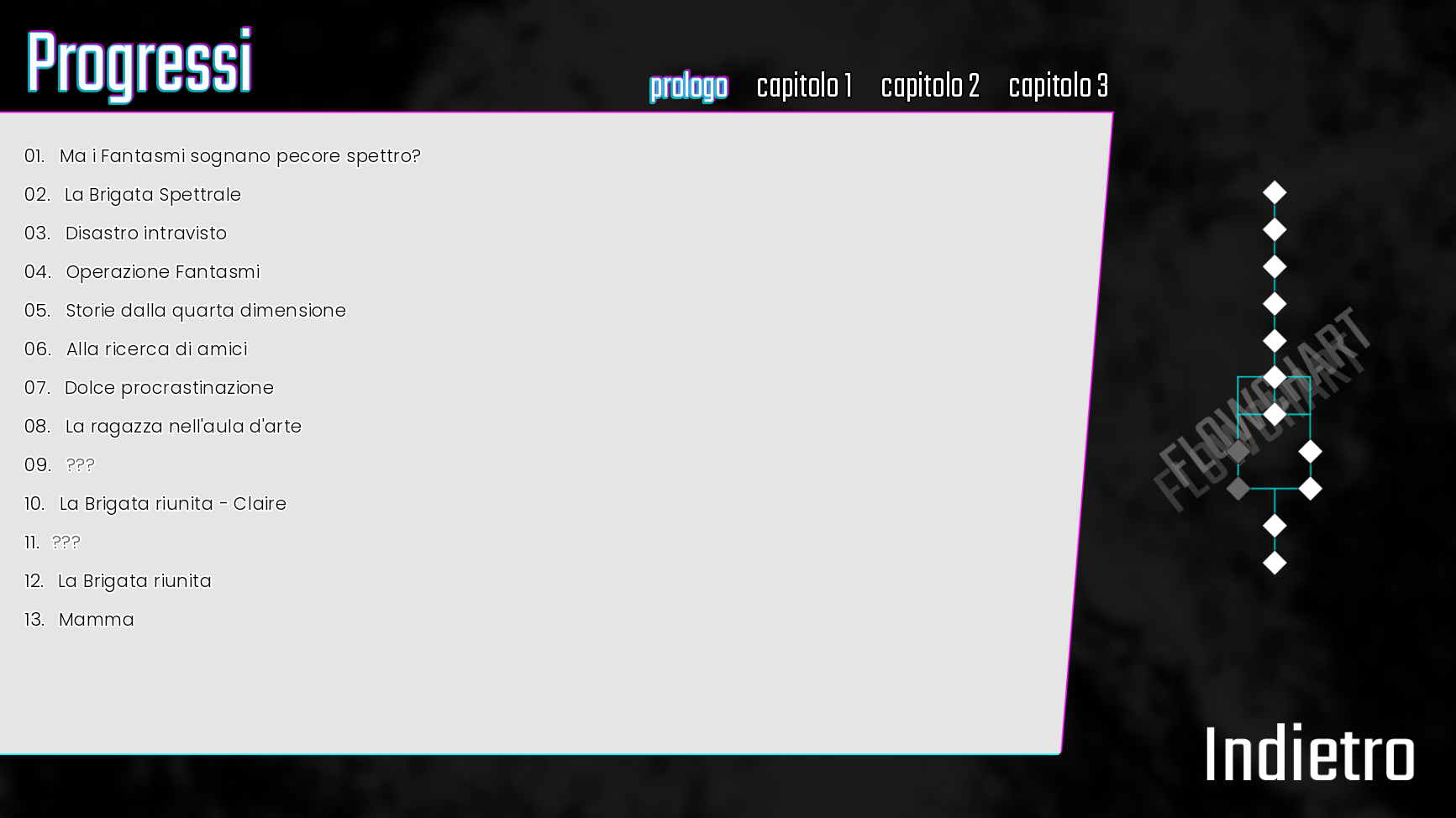 As you hover on the scene titles on the left, the corresponding marker is highlighted on the right. Furthermore, locked scenes are also grayed out! Man, I must be a genius!

If you agree with the last sentence, I've got terrific news for you.

I could've figured out a programmatic way to generate the flowchart image. Look at how simple that one is! Except this is how it turns out in chapter 3:

I gave up thinking. I'm sure someone else can figure out the right algorithm. Good for them. But what I lack in brain, I make up for in sheer force of will. I drew the images by hand and painstakingly wrote ALL coordinates ONE BY ONE. 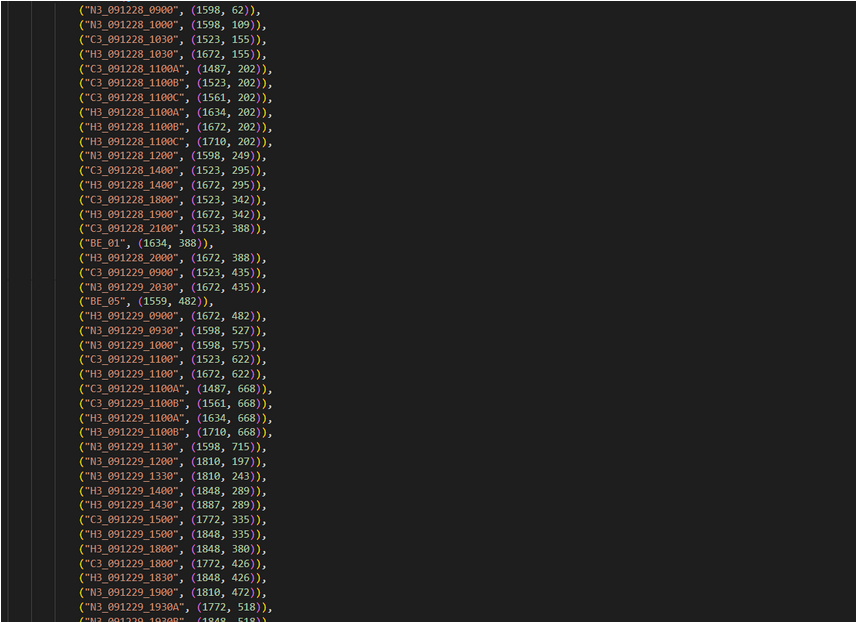 And THIS is how I hurt my arm.

At this point, I was done! Not perfect, but usable and most of all finished!

Or so I thought.

Actually, let's start from the middle

When you write a visual novel script assuming it will be played linearly, you take a lot of things from granted. When you decide anyone can jump back and forth at any time from a separate screen, those assumptions burst into flames.

The former was a bother, but the latter was a real headache. In the end, I made ALL choices a persistent variable, then called a custom function to calculate the trust value each time I needed it.

This is the least spoilery check I can share.

Route points were still counters, though, because if you jump around in chapter 1 to save time, you deserve to mistakenly end up with Hongkui.

And this time, I was done. For real.

Tune in next week for "Progress Chart — or How I Learned To Stop Worrying About Bad Code And Just Do It (Part 2)", where I discover I should've paid more attention to route flags.

Wow. That's brave. I've seen the mess my novels make in Twine.  No way I'd even think about trying to put that up for a user to see... Hard enough to keep it tidy enough for me to follow while I'm writing. :-)

One thing's for sure: if I knew the work I'd have to put into the Progress screen I would've written less scenes, but longer :')